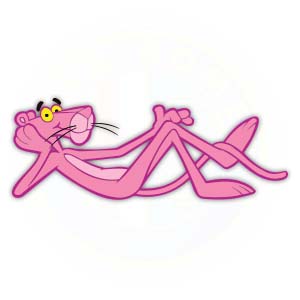 The Pink Panther is the main and title character in the opening and closing credit sequences of every film in The Pink Panther series except for A Shot in the Dark and Inspector Clouseau. His popularity spawned a series of theatrical shorts, merchandise, a comic book, and television cartoons. He starred in 124 short films, 10 television shows and three prime time specials.

The animated Pink Panther character’s initial appearance in the live action film’s title sequence, directed by Friz Freleng, was such a success with audiences and United Artists that the studio signed Freleng and his DePatie-Freleng Enterprises studio to a multi-year contract for a series of Pink Panther theatrical cartoon shorts. The first entry in the series, 1964’s The Pink Phink, (his debut appearance) featured the Panther harassing his foil, a little white mustached man who is actually a caricature of Friz Freleng (this character is officially known as “The Little White Guy” and/or “The Man” [1]), by constantly trying to paint the little man’s blue house pink. The Pink Phink won the 1964 Academy Award for Animated Short Film, and subsequent shorts in the series, usually featuring the Pink Panther opposite the little man, were successful releases.