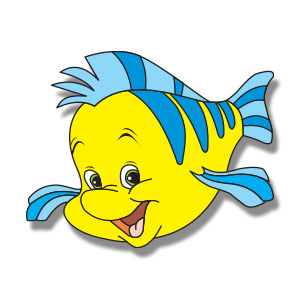 Flounder is a supporting character from The Little Mermaid. He is Ariel’s best friend. Despite his name, he is not a flounder, but a tropical fish. Flounder scares easily and is prone to panicking under stressful situations. However, when Ariel is in trouble, he comes through for her without hesitation. As seen in Ariel’s Beginning, Flounder was not always jittery and nervous, in fact, Flounder was just as adventurous as Ariel.

However, it can be concluded that after the first few adventures with Ariel, Flounder began to suffer from anxiety. As mentioned above, despite his fear, Flounder will eventually come through for Ariel when needed, to the point where he’s not only her closest friend, but her most loyal one, at that. Because of this, the two are nearly inseparable, and the bond is incredibly strong throughout the franchise, especially during episodes within the television series. Like Sebastian, though, even Flounder, at times, tires of Ariel’s reckless behavior and expresses so when a dangerous adventure is at hand, but he willingly puts up with it not only to watch out for her but because he truly loves her, much to Ariel’s relief and joy. Because of this, Ariel is rather protective of Flounder, and when in peril, she always puts his safety before her own, making her he’s always the first to make it out safe, once again showing the connection between the two to be powerful, to say the least.