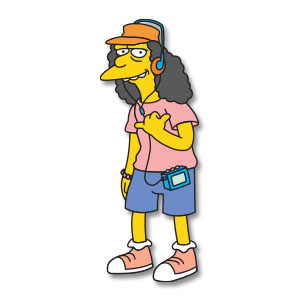 Otto Mann is a former school underachiever who now drives the school bus for Springfield Elementary. Otto was initially conceived by Shearer himself as a caricature of heavy metal music aficionados who mostly play guitar and do drugs while occupying a low-level labor job.He then became a character well known for his party tendencies and calling others slang such as “dude”, “lady”, or “pops”. He is friends with Bart on some occasions, despite their age difference, and dreams of starting his own rock band to become a celebrity, all while getting the school bus into trouble one time after another.