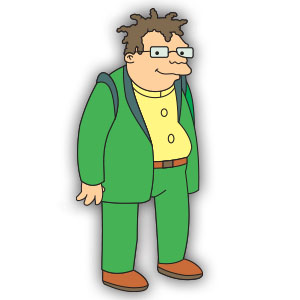 Hermes is a bureaucrat working for the Planet Express delivery company, under Hubert J. Farnsworth. He is friendly and hard working but can also be nasty at times, particularly to Dr. Zoidberg. Despite his wide frame, Hermes was an accomplished limboer. He has a rivalry with Barbados Slim. Hermes also has a habit of saying “Sweet (something) of (some place)”. The show also hints that Hermes does not like his co-workers in “The Farnsworth Parabox”. He first tells Leela to shoot Bender, Fry and Zoidberg, and second has to be begged not to eject the crew from the airlock.