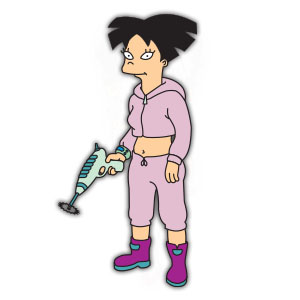 Amy Wong, voiced by Lauren Tom, is a main character from the Fox and Comedy Central television animated series Futurama. She works as an intern at Planet Express (supposedly kept around because she shares Professor Farnsworth’s blood type, and doesn’t notice the Professor’s tendency to send his crews on suicide missions). She is a ditzy, spoiled, wealthy daughter of agriculturalist-industrialist Han Chinese rancher parents who raise buggalo on Mars.

A graduate student for most of the series’ run, in season six, she earns her Ph.D in Applied Physics from Mars University, earning her the title of Doctor. When creating Amy’s character Matt Groening and David X. Cohen decided that she would be something of a klutz. Groening was interested in exploring the idea of using slapstick comedy and physical humor with a female character since most of this humor was done by male characters in his previous work The Simpsons. {googleads right}Amy’s personality was originally much different; Lauren Tom stated that she was supposed to be “a car mechanic, really tough lesbian sort of character.” However, her characteristics were changed in order to provide a better contrast with Leela’s. In the season four episode “Kif Gets Knocked Up a Notch”, in which Amy’s boyfriend Kif becomes pregnant, there was some disagreement among the writers as to whether Amy should be the real mother of his children. It was eventually decided that making Amy the mother and having her initially reject the children would make her too unlikeable. Over the course of the series, Amy is shown that she’s not an entirely spoiled rich girl, being able to overcome just about any obstacle in order to help others. Her relationship with the other workers of Planet Express is quite good, and she sees them like a second family (especially Fry and Leela, who she considers like the brother and sister she never had). Like almost everyone on Planet Express, she shows very little or no respect for Zoidberg (though sometimes, she states that she has a huge respect for him and the way he lives his life).